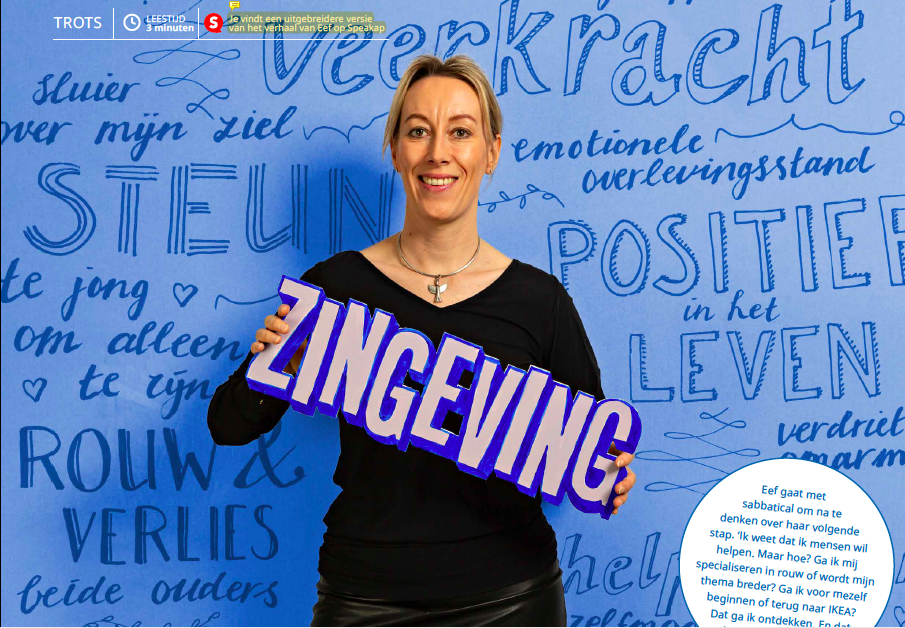 For IKEA, I interviewed Eef Loozen. When Eef was a young girl, she lost both her parents. Ten years later she lost her brother too. But she lived on, learned to grieve and now counsels people in grief and loss. I share this interview here because I was very impressed with Eef, her resilience and personal transformation. Essential ingredients for any transition.

Eef Loozen is People & Culture Market Area Manager at IKEA Netherlands, but on January 1 she started her sabbatical. To discover what else she can do to help other people.

When Eef was just 12 years old, her mother died of breast cancer. Five years later, her father suddenly lost three pounds in two weeks. He went to the doctor, who said something had to be removed from his kidneys. When they operated on him, the cancer turned out to have spread everywhere. The very next day he died of internal bleeding.

At that time Eef was 18, it was just before her final exams. ‘With my two older brothers we stayed in our parental home. Too old for a foster family, but actually too young to live alone.’ They received plenty of emotional and practical support, from family and friends on both their father’s and mother’s side. Their mother’s sister supported them emotionally and Eef grew very close to her. Their father’s brother helped them with practical and financial matters.

Aunts on their doorstep

‘Fortunately, we were pretty well taken care of financially. We received an orphan’s pension until we were 21. My oldest brother already received a student grant. The house we lived in only had a small mortgage left. My oldest brother and I also had a job. Aunts and neighbours turned up daily on our doorstep with pans of food. Sometimes we thought: just leave us alone!’

With my two older brothers we stayed in our parental home. Too old for a foster family, but actually too young to be alone.


Eef doesn’t remember whether there was ever talk about an adult coming to live with them. ‘We wouldn’t have wanted that anyway.’ However, Eef and her brothers couldn’t really talk about the dramatic events. ‘My father was a math teacher and my brothers were real beta-men too. Talking about your feelings was out of the question. And there I was stuck in between.’

After a year the brothers and sister decided to go their own ways. Eef: ‘I actually initiated it. I wanted to study in Sittard and share a flat with a friend.’ After a year that friend left for Eindhoven and Eef went to live on her own. At 24, Eef bought a house with her then-boyfriend. ‘I skipped the happy student life. I was studying hard, running my household, figuring stuff out.’

All these years Eef didn’t realize that she was suppressing her grief. ‘I didn’t do it consciously. When people asked about the loss of my parents, I did talk about it. But I didn’t live through it. I was in emotional survival mode. This wasn’t all bad. It actually allowed me to pass my final exams and then do art school. But around my 26th birthday it was as if there was a veil covering my soul. Shopping or going to a party: it felt exactly the same.’ Eef decided to see a psychologist.

Around my 26th birthday it was as if there was a veil covering my soul. Shopping or going to a party: it felt exactly the same.


‘For a year I mapped out my life with the psychologist. I examined: who were my parents as children, as young adults? Who were they besides their father and mother roles? What had been their dreams? I wrote a letter to my family with these questions. I received back a handwritten letter from my grandmother and a photo book that my uncle had put together for me. It was a very intense grief I found myself in, but also very valuable.’

In February Eef completed her work with the psychologist and then, in April, her brother committed suicide. ‘Again, I had to deal with an intense loss. But this time I had learned how to grieve. While I had put off grieving the loss of my parents for over a decade, now I started right away. I went to the psychologist two or three times, that’s all I needed. I knew how to grieve. Again, I began researching. I visited the room in Amsterdam where my brother lived at the time of his suicide. I read about his mental illness and I read some of his writings. I also seemed to grieve more effectively. It came on faster and seemed shorter. I allowed myself to completely let myself go.’

I seemed to grieve more effectively. It came on faster and seemed shorter. I allowed myself to completely let myself go.


That is perhaps the most important thing Eef has learned about grieving. ‘Look the grief in the face and fully embrace it. Engage with the whole range of perspectives and emotions that come with loss. The terms “process” and “move on” sound like you leave the grief behind you afterwards. You don’t. The physical, heartbroken grieving, that you may leave behind. But the grief remains with you in one form or another. Allow it to.’

‘Be aware’, says Eef, ‘there are parallels in the stages of grief that each goes through, but everyone experiences it differently. Don’t compare how you grieve to how someone else does it. Don’t think: “She was already at work after three weeks.” Look at your own grief and mourning without judgment. The judgment only distracts.’

And if someone else around you is grieving, says Eef, that is the most important thing: to be there. ‘Don’t try to solve it for the other person. Do not give advice. Just be there. The other person just wants to tell his or her story. Also make sure you are there mentally. Listen and ask questions. But also allow for silence. For your own grief and that of the other person. Often, we start babbling because we are uncomfortable. But you can also just say, “I don’t know what to say, but I just want to be with you.”‘

Don't try to solve it for the other person. Do not give advice. Just be there. The other person just wants to tell his or her story.


Grief has long been something scary for Eef, something traumatic, but the events have shaped her. ‘They have given me enormous resilience and a positive outlook on life. It has therefore become something beautiful. And how cool is it that I can now help other people with it? Since the summer, I have been working at Humanitas as a volunteer in Grief and Loss Counselling. When I saw the advertisement, my heart started to beat like crazy. I realized: that’s me! That is what I can contribute! It also made me laugh a little: how did I never see that before!’ Currently, among others, Eef is counseling a 22-year-old girl who lost her mother.

It is not for nothing that Eef started her work at Humanitas this summer. ‘Being at home a lot because of corona has been the trigger for me to think about what life is really all about. I decided to take a year’s sabbatical to think about my next step. I know that, as with my work for People & Culture at IKEA, I want to help people to discover their next step in work or in life. Will they be teams or individuals? Will I specialize in grief and loss? Or will my theme be broader? Will I start my own business, or study, or go back to IKEA? All of that, I am going to discover this year. And that’s a wonderful feeling.’

Meanwhile Eef Loozen has started her own company in coaching, transformation, leadership and development. eefloozen.nl