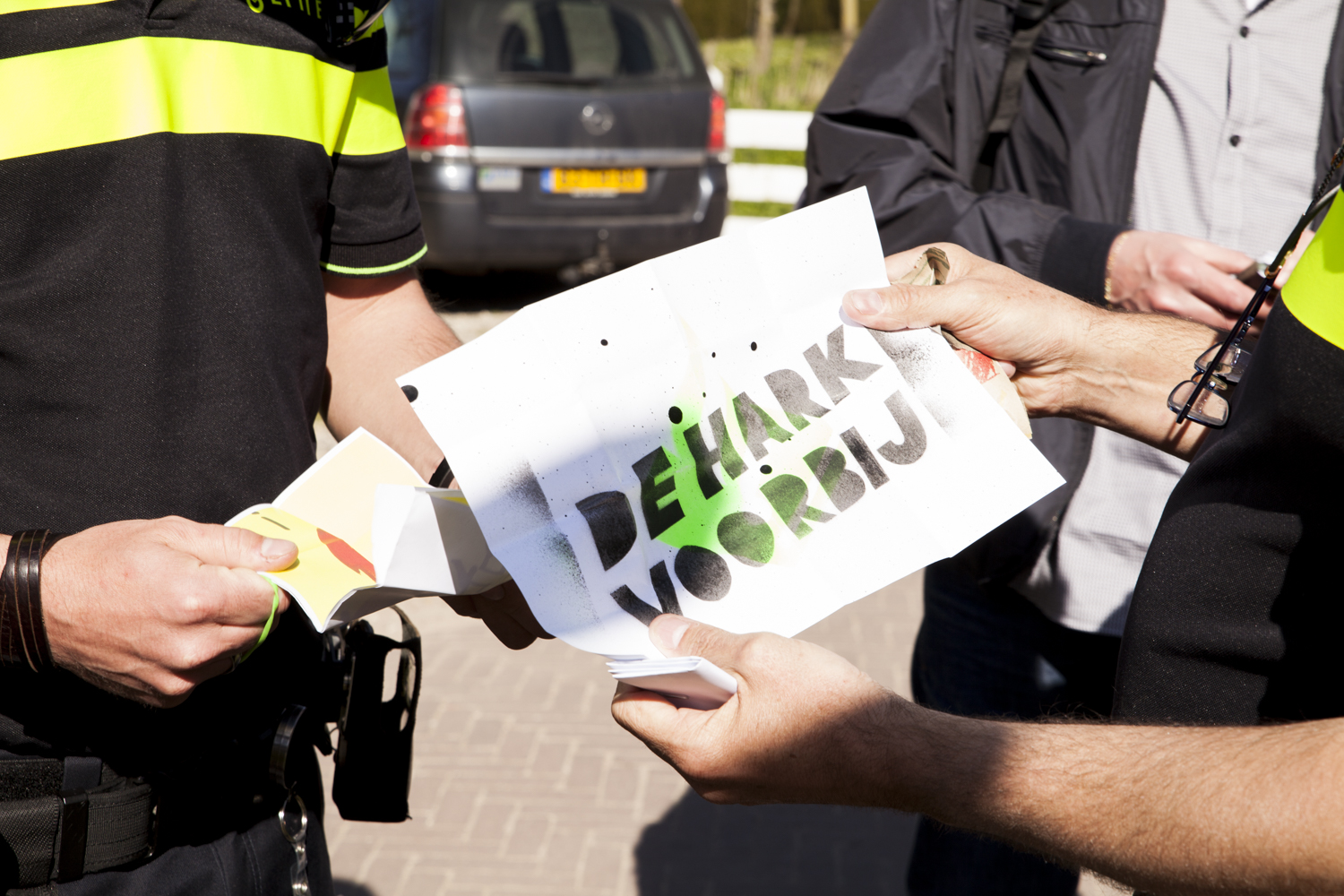 How often doesn’t one hear a professional sighing: ‘I love my job, but the organisation I work for…’ Police people, nurses, teachers and many other professionals are constantly prevented from doing their work properly by all kinds of rules, regulations and interference by managers and other staff. With all the dire consequences for society.

Fortunately, in many organisations, professionals are standing up and forming movements to reclaim their own professionalism, judgement and space to do their work properly.

In an earlier post I talked about a movement within the Dutch National Police, in which I took part between 2013 and 2016. Not as a police woman, but as a ‘communication activist’. This movement, that in Dutch was called De Hark Voorbij (literally: Beyond the Rake. A reference to the common organisation chart of a top down organisation), was initiated by the police workers representative board and designed by DeLimes, a network of ‘organisation activists’, to help the police men and women rediscover how to have a say in their own work and in what they think is good policing.

As a part of the police movement, we discovered that this movement that we called a ‘slow emancipation movement’ needed another type of communication than the classic, top down corporate communication. It is what I call ‘activist communication’.  A different style, a different approach and different methods.

Story catching; that was the basis for the communication of the programme from the start. The stories of the participants, their experiences, their discoveries, their struggles and inspiration and their insights. In order to spread their ideas and the philosophy of the programme. We distributed the stories through a sheltered intranet platform, social media and in a supplement to the employee magazine of the police. Designed in the corporate style of the police. Not very striking and quite conformist.


And also, suspicious, we discovered during the course of the programme. For police men and women who were completely done with the reorganisation into the National Police and with how they were treated. The employee magazine and the mainstream corporate communication, was part of ‘the system’ and therefore suspect. Our supplement and our articles on the regular intranet therefore were also. And that, while our message was very contrary to the mainstream thinking and the management hierarchy.

The voice of the undercurrent

The programme was a fresh message for the professionals, in the context of a tiresome reorganisation. So, the communication needed to convey that we had a fresh message. That we represented the voice of the undercurrent. Therefore, we decided to radically revamp our communication in a more activist style communication. Along the lines of these six principles:

I will explain each point below. 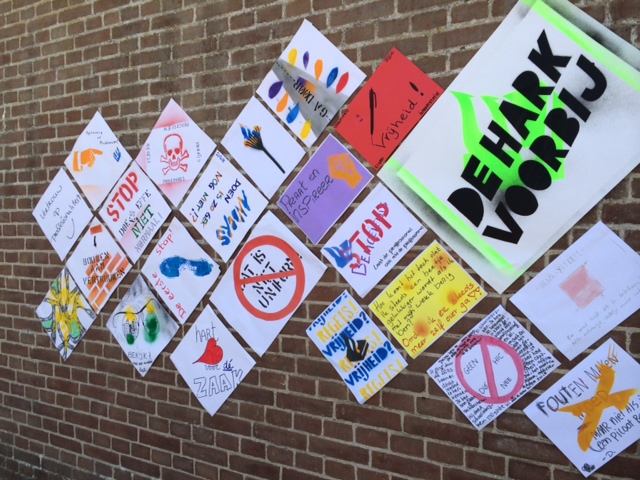 From the start, the participants in the programme have played an important role in the communication. Not only were the stories we harvested about them, but sometimes they even wrote their own stories, made their own photos and videos. But we wanted to involve them in other ways. That’s how the poster workshops evolved. During events of the programme we had a stand, where we invited the participants to come and make their own activist posters. All they needed was a grievance or irritation, or and inspiration, that they could turn into a motto (with my help). Then two artists helped them to turn it into a design. During the workshop, the walls filled themselves with catchy activist posters.

Okay, so the supplement in the staff magazine hardly got any attention in the       enormous information overload the police men and women get on a daily basis. Apart from that, we seemed part of the system. Inspired by zine machines, we came up with story machines. Old cigarette machines bought on the Dutch equivalent of EBay and pimped by a street artist. In the machines were little packets with stories about the colleagues and the posters made by them. The packets are handmade in brown paper and sprayed by our street artist and they turned out to be real must-haves, all with different combination of articles and posters. The police men and women eagerly pulled them from the machines; for themselves and to pass on to colleagues. They were opened with great curiosity and read and looked at with interest. Every paper sheet with a story on it also had a logo sprayed on the back. So that it could also be hung up as a poster. And they were. Colleagues hung the posters around their desk, or more anonymously around the coffee corner or on the notice board. 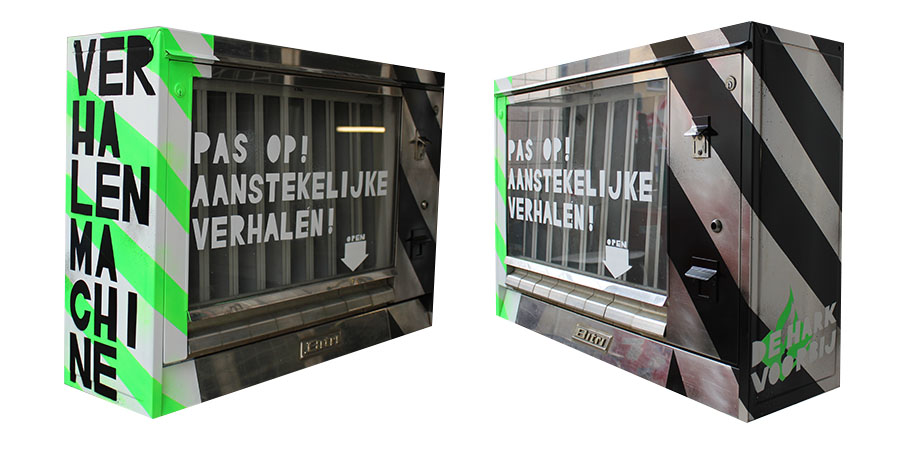 A memorable moment after the first poster workshop was when we spread out our posters on the floor and instantly realised that we had found our own design and image style. The colourful posters matched our stories so well. It immediately helped us leave the police identity and to develop and design our own. One that matched our own fresh and rebellious voice. A designer then developed a fresh and activist graphic design that went very well with our colourful posters. A design with a black and white base that referred to the stencilled or risoprinted punk zines and other activist publications. A black and white that also framed our colourful posters and didn’t compete with them. 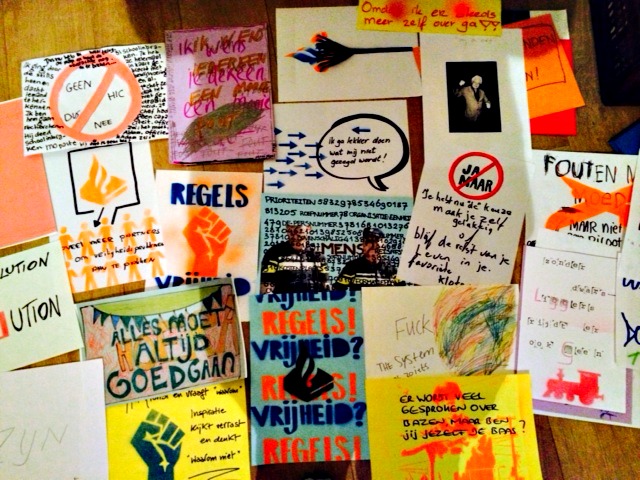 Meanwhile the police wanted a public website for our movement to show the world what they were doing. And that was easily accessible for the police men and women. A website that made clear what the movement entailed and where one was made enthusiastic about the movement. An online translation of our activist communication. With many pictures of our activist posters, photos and videos of our events and personal stories in text and video, stories about our philosophy and great quotes. Here also Rogier Rosema did the design.  The fact that we chose for a WordPress theme that was based on square pictures also has had an influence on our style. Now, in the poster workshops we gave the participants square sheets of paper to work on. Which is a bit unusual for posters, but actually looks good. Next step of course was to start an Instagram account, since we already had the square images (I know, this is long passé on Instagram… ;-)) 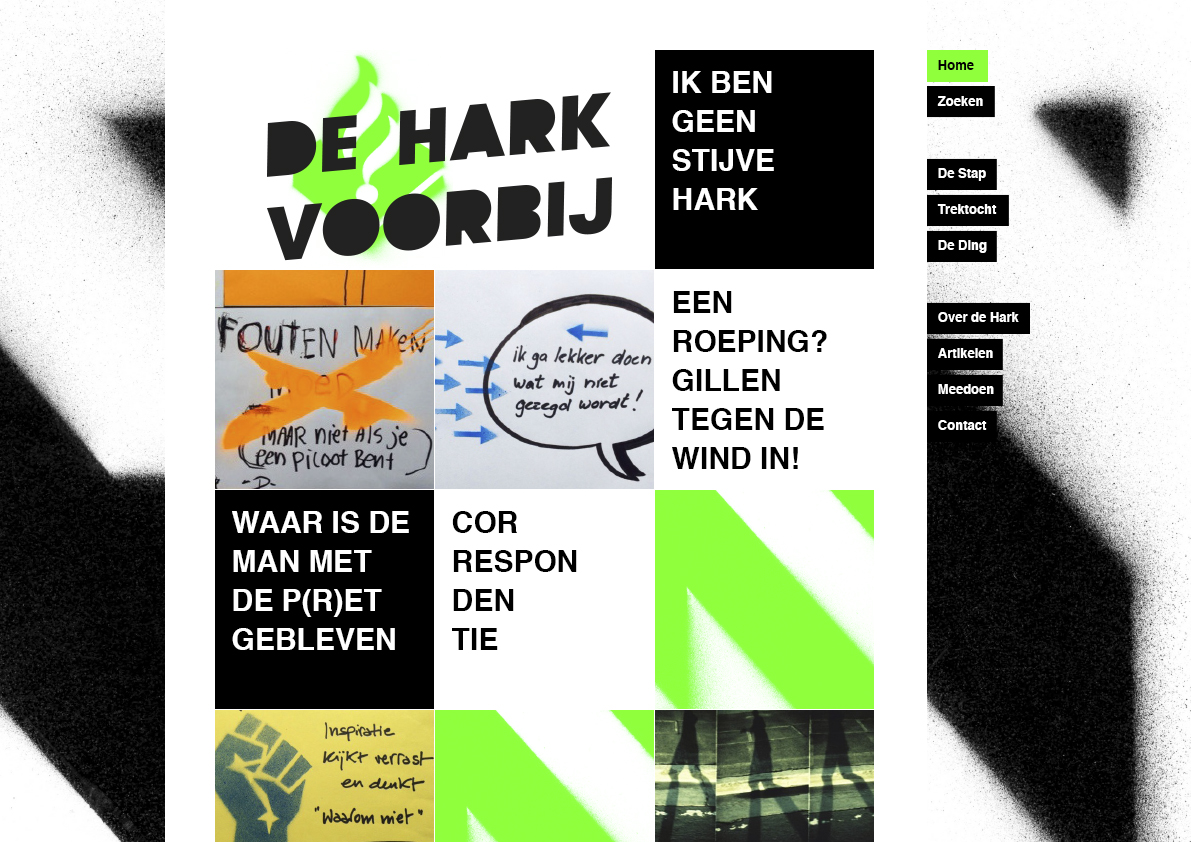 In the meantime, we had such a lot of material, and we noticed the story machines had their impact. To build on this impact we started guerrilla like forms of communication to spread the word. We popped up at various places in the police stations and offices. Suddenly, in the morning, a (high) wall in an office where there was a lot of tension (or that would be very forward and successful) would be covered in posters. Or a pop-up kiosk with the story machines would turn up in the canteen for lunch, during a briefing or on a team day.

At the same time, we continued to do interviews, make videos and collect stories in other ways. And we continued to coach the participants in writing their own story. Because stories remained the basis. They were the vehicle to spread the ideas and philosopy of the programme and they remained to be so. <<<